There is a lot of talk and concern about the increasing crime rate in Canada. Many Canadians believe that crime is as high or even higher than ever before. In some Canadian provinces, concerns are understandable and valid. Fortunately, though, when looking at burglary statistics in Canada, after steadily increasing from 1960 through 1990, the numbers have actually dropped significantly over the past 20 years.

Burglary is when someone enters a building illegally with the intent to commit a crime, especially theft. It’s often referred to as breaking and entering but may also be called robbery, break-ins, or theft.

Some of that noteworthy decrease can be explained by the pandemic that began in 2020. But even looking at the previous uptick, burglaries in Canada had dropped by nearly 45% since 2020. Specifically, police reports of breaking and entering dropped by 16%, theft under $5,000 dropped by 20%, robbery decreased by 18%, and shoplifting saw a decrease of 36%.

Some of these numbers are likely due to the stay-at-home orders and people working from home. Yet for Canada as a whole, numbers for theft, breaking and entering, and robbery has been trending downward since 1998. Numbers for 2021 have not yet been released. 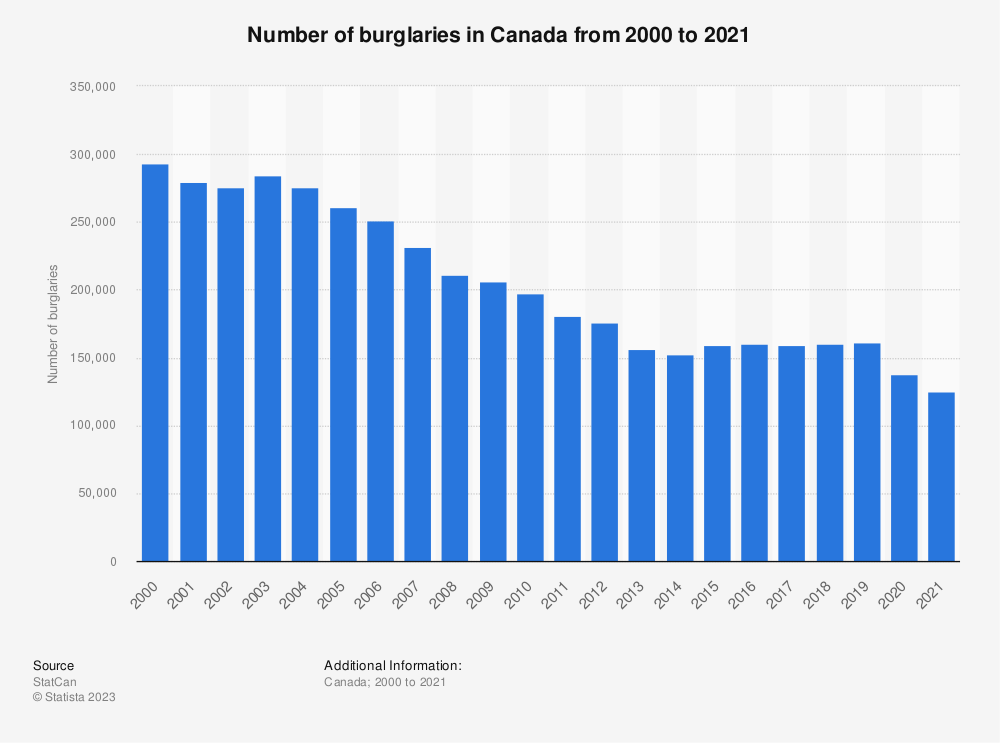 Canada’s reputation as a safe country to live in and visit is well deserved. Especially when compared to our neighbors to the south, Canada’s crime rate is significantly lower, even when Canada’s smaller population is considered. Overall crime rates in Canada have dropped for the past two decades, with 2013 having the lowest crime rates reported (by police) since 1969.

One province, in particular, has seen a greater increase in burglaries, including thefts of under $5,000, breaking and entering, and vehicle theft. That is, Alberta reported an 18% increase. Sadly, this number isn’t surprising for people in the area, as Alberta also experienced a loss of 19,600 jobs in 2015. That’s the greatest job loss since the 1980s. Recessions tend to lead to more petty crime as people struggle.

While some areas have experienced more burglaries, other areas are continuing to trend downward. For example, Prince Edward Island has continued to enjoy declining crime rates. This is likely due to the difference in economic situations and opportunities as well as the varying social frameworks between the provinces.

So, depending on the area of Canada you are visiting or residing in, you may have more or fewer concerns about burglary statistics. That said, Canada as a country is still incredibly safe. And many of the crimes Canadians are concerned about occur less often than most Canadians understand. This is often due to how the numbers are reported and how much attention they receive as well as how the media reports on the worst crimes over those that are more common.

Interestingly, while both crime rate and severity of crimes are down 17% over the past decade, when asked, many Canadians in every region believe crime rates have been increasing. Year-to-year fluctuations are to be expected. However, it’s more important to watch for longer-term trends to get a full picture of what’s really happening. And contrary to opinions, crime rates really are lower. For just a few more examples, in 2020, the property crime rate was the lowest since 1966. And motor vehicle theft was 24% less than the decade before.

In other words, crime occurs in Canada just as it does worldwide. But public concerns tend to be largely exaggerated, potentially due to uneven media coverage or for political purposes. That said, in every part of the country, taking steps to protect your home and family is still a worthwhile investment.

Yes, according to burglary statistics, break-in rates are low in Canada, and rates are declining, but they do still occur. A home break-in is estimated to happen every 90 seconds in Canada. These can be costly, not to mention traumatic. Securing homes can save you pain and suffering, inconvenience, and money. Home alarm systems have been shown to deter burglars, reducing your chances of becoming a victim. Plus, simply having a home alarm system can decrease insurance premiums.

Regardless of where you live in Canada, an ADT (now Telus) monitored alarm system from Alarm Guard will keep you feeling secure and protect your assets. Save now on your homeowner’s insurance with an ADT (now Telus) system! Check out our packages and call now for a free quote at 1-855-518-4458.

How the Wildfire Started No one knows how the fire began; it’s unclear whether it is from natural causes (such as lightening) or whether it’s…

Here’s how each is a key advantage of having a smart home—with examples of products available to homeowners. Home Automation Home automation enables the remote…

Where most of the heat happens, probably to no surprise of the residents who live there, is British Columbia. During the summer, temperatures can reach…